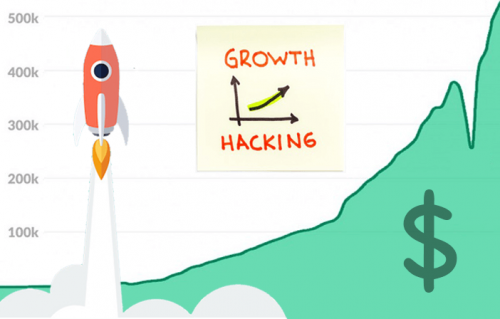 Growth Hacking - Solution to increase the number of users?

"Growth Hacking" is a quite new and interesting concept. Do you think that your users number was initially several dozen, maybe up to several hundred, several thousand, sometimes up to millions in a short period of time? This may sound unbelievable, but with "Growth Hacking" it is possible. The proof for this concept is the series of famous companies using this technology such as Facebook, Dropbox, Quora, Pinterest, ...

In the article "What is Growth Hacking?" of Mattan Griffel, "Hacker" is interested in achieving goals more than how to do it. They are not forced to follow an existing method, so hackers often offer many creative ways to achieve their targets. "Growth Hacker" is similar. But instead of the goal of obtaining unauthorized access to a certain system, the goal of "Growth Hacker" is to increase the number of users for a specific product.

According to Sean Ellis, the main task of a "Growth Hacker" is to focus on creating sustainable and stable growth for the company through analysis and understanding of consumer aesthetic taste and psychology.

"Growth hackers" are often equated with "marketer", but in fact they are not quite so. "Marketers" are people who often focus on using traditional methods to persuade users to buy items such as direct sales, television, radio, letters, print ads (such as magazines, ballot books, billboards ...) and printed advertising materials such as product catalogs or brochures ... Although in the future there may be a lot of "marketers" becoming "growth hackers", however "marketer" needs to be trained more skills to meet the requirements of "Growth Hacker".

In general, they are disciplined people, always demanding empirical process to make decisions about what to do, what not. They understand that the product itself is the most effective marketing tool, and they also have certain technical insights to know how to take advantage of existing platforms on the Internet, helping startups quickly access to billions of potential customers.

3. Creativity based on experiment

In front of a specific project, instead of just making an assumption and building a strategy based on those assumptions, "Growth Hacker" will come up with feasible strategies, test them on a small scale and compare results achieved.

Small-scale testing only evaluates a certain part of the tested strategy. What's important for startups is that these tests are still effective when applied on a large scale, so "Growth Hackers" need to use methods to evaluate such as A / B testing. or cohort analyzer to know ideas are feasible or not.

The ideas given are not always effective, so "Growth Hacker" is very interested in the speed of conducting the tests, giving many tests in a short time to obtain results in the fastest way.

4. Use the product to advertise itself

When referring to viral marketing, the majority of marketers only think of attractive, highly pervasive advertising content. However, with the development of the Internet, there is a much more reliable viral marketing method that integrates the introduction information into the product.

Hotmail has attached the words "Get your free email at Hotmail" to the end of the message being sent.
YouTube and Vimeo let users easily embed videos into other websites.
Dropbox encourages users to recommend to their friends to use the service by giving more space and that strategy has contributed up to 60% of the company's growth.

In companies, product development and product marketing are often done by two different groups. One group only focuses on developing features, creating finished products, the other group only focuses on making plans to promote products that sometimes do not know the features of the product. Therefore, Growth Hacker is the bridge to connect the two groups together.

Today, promotions from companies to users are increasingly expanded thanks to the development of many new platforms, especially social networking sites. Thanks to social networking sites, millions of users can easily access a product with a single click, easily sharing information about a product, so building a communication strategy through social networks is extremely important, and the work of "Growth Hacker" is to know how to take advantage of those platforms.

Over time, the benefits brought by existing platforms will decrease as other companies join. So being the first company to take advantage of the new platform's features will bring a huge advantage.

Such strategies also need a thorough understanding of platform APIs, which most traditional marketers do not have or can not.

6. Where to learn about "Growth Hacking"?

Some sources to learn about "Growth Hacking" are at the blog of leading experts in this field such as:

Andrew Chen: An entrepreneur focused on mobile phone products. His job is to research data and increase the number of users. He is also an early-stage consultant for AngelList, AppSumo, Cardpool (acquired by Safeway), Frankly, Grovo, Kiva, Mocospace, Qik (acquired by Skype), Wanelo, WeeWorld, and also the late for 500 Startups.
Noah Kagan: is an American businessman and founder of AppSumo. He used to work at com, Facebook, Gambit Payments, Intel, ...
Danielle Morrill: CEO and co-founder of Refer.ly, formerly the first employee at Twilio - a San Francisco-based cloud computing communications company. She is a supporter and consultant for businesses through Startup Weekend, Twilio fund, an expert advisor for 500 Startups.
Aaron Ginn: is a growth hacker, worked for Lockheed Martin, VMG Health, Simplee, Mittromney ...
Growth hacker board on Quora.

Over the past few years, creative "Growth Hacker" has actually developed highly differentiated and practical ways. People like Noah Kagan (AppSumo, Mint, Facebook), Mike Greenfield (Circle of Moms, LinkedIn), Dave McClure (500 Startups, PayPal) and many others have pioneered the focus on spread, email, look for ways to optimize and market.